I’ve got another five star review!!  I was at my friend Sandra’s house finally catching up and downloading the kindle app to her PC so she could read my book.  For those of you that have read my book Sandra is whom the character Kassie (Kassandra) is based on and I also borrowed her daughters names for characters – Cat & Audi.  As I was explaining to her how to do the one click buy we suddenly realised that the reviews had just changed from 9 to 10.  With an excited gasp and frantic scrambling of the mouse we found the new review and read it.  Have a read!
5.0 out of 5 stars Arrival (Birthright Trilogy Book 1) by B. Sharp, February 25, 2011
By B. Sharp (Eyota, MN) – See all my reviews
This review is from: The Arrival (BirthRight Trilogy) (Kindle Edition)
My thoughts:
I have just finished reading the book (CAN’T believe the cliffhanger ending) and am DYING to get my hands on book 2!

The fast version: This is a fantastic read! The characters are incredible, the story is entertaining as well as well written, and the world building is amazing! The love story twisted in with the magic and the fantastical creatures is great. It is an all around MUST read!

The not so fast version:
Nicole puts together incredible characters. There are humans, dogs, cats, dragons, griffins, centaurs, more types of creatures than I can name! Each is described in detail, regardless of how big or small a role they play! Each is given a personality that endears them to you from the first meeting! Okay, some of them are less endearing – Jenviet for instance (she’s the “bad guy”). I was thrilled by the interactions of the griffins and the Griffin Guard and I love that Cat is able to communicate with Loushka even though she is not linked to her.

Of course the fact that all four of the women are strong, independent, and capable makes me love them. I was excited that they could bring all their defense, attack, and protection skills to their new world and share them with others. The interactions of the women with the military men when faced with training are classic. The four main characters are fantastic, but the men!!! Nicole has created men that I go crazy for! I love that there are 5 Griffin Guards and that four are single and one is married to such a great woman. I know it could seem corny that there are four women searching for soul-mates and suddenly… but truly – could it work any other way? I enjoyed the differences in the four couples and was impressed with the thought and energy that has gone into creating them for us. The characters are the perfect blend of serious and funny.

The author does a great job at world-building for the reader. The world that the women find themselves in after the spell is cast is described in detail, from the scenery to the animals. As a reader, it is easy to place yourself right there with them.

This is a page turner, I found myself unwilling to put it down to do anything else. I was enthralled by wanting to know MORE!

Sandra and I did the excited squeals and happy dance.  Then Audrey came in to see what was happening and joined in *grin*.  It was so much fun catching up and I’m now booked in to stay the last Saturday of every month at their place like I used to when I volunteered for the animal shelter.  This review has me smiling so much!  It’s the best feeling in the world to know someone’s fallen in love with your story J
Ooo and just watched, Love and Other Drugs, with Anne Hathaway and Jake Gyllenhaal.  SO enjoyable.  Pulls at the heart strings (you’ll want a couple of tissues) and makes you SMILE!  The chemistry between the two leads is incredible. 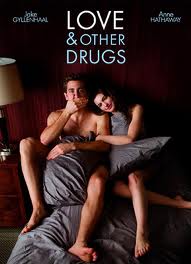