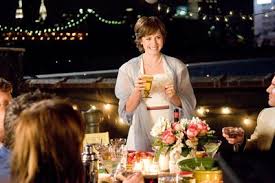 I meant to put something vaguely entertaining on the computer while I worked on the draft for book three. But then I put Julie & Julia on. It’s a film I adore—I love any films about beautiful food/houses/gardens/clothes but it’s really not a background film. I should have put Marie Antoinette on… Anyway the film has me laughing with how both Julie and Julia are absolutely clueless in regards to how book publishing works. Listening as Julie moans how she has a novel hidden away because no one wants to publish it. But now of course you can. Just stick it into the appropriate web site and voila! Published.
As strange as it may sound (to some of you) having two novels out in the big wide world doesn’t seem as exciting as it should at times. Technically speaking, both novels are doing as well as many other traditionally published novels do. Better in fact.
In some part, I think it’s due to most of the people I converse with on blogs/facebook and even my friends, are writers—of one sort or another. It kind of feels like everyone’s doing this from my POV. It surprises me when people are so surprised at what I’m doing.
I didn’t really think about it until my friend Chelsea—who inspired the character Leseach—in the midst of putting dates in her new calendar for the year made me realise I’m 30 this year (July 30 to be exact ;p) and she commented,
‘It’s really awesome that you’re turning thirty and already have two novels to your name.’
It kind of stunned me. Yes, partly because I’m still pretty convinced I’m just twenty five but mainly because of the way she said ‘novel’.
It brought me straight back to being a thirteen year old, with just enough pocket money to buy one new book. At that stage, I loved The Babysitters Club and Sweet Valley High. My mum wasn’t so thrilled with me reading Sweet Valley High (she didn’t think it was age appropriate ;p) but as I’d been reading above my age since I was eight she couldn’t complain too much.
I remember the absolute joy I felt at walking into the bookstore. The gorgeous smell of new books wafting around me and all those glorious, glossy, beautiful new covers. Touching those crisp, stiff pages and being SO careful not to bend the spines. Even now, even my very favourite books that have been read hundreds of times (yes really! I’m a speed reader) look almost new.
Then after hours of consideration (if I was lucky—it pays to have a mum who loves to read too) I would choose the book, pay for it and take it home. Then I’d promptly resent my parents (yeah, after spending the pocket money they gave me.. teenager ;p) as they asked me to do some task that prevented me from curling up with my new, precious, purchase.
And when I finally got to reading it! Oh, the pages would just fly and before I knew it, the last page and final words would be done. I’d sit there, with a sense of absolute satisfaction at the read and then intense gratitude to the author who’d just provided me with the couple of hours entertainment. I would marvel at how a person could put together strings of words into another world and allow me, the reader, to experience it all. The mere concept of attempting such a task was beyond daunting to me.
So now, to have a friend, a very honest friend mind you—one who warned me that if she didn’t like my first book she’d tell me rather bluntly—point out to me that I’d done the same to her with my two books (and this from a girl who HATES fantasy novels *lol*), just stunned me actually.
Sometimes I really need to take my own advice and be excited about what I’ve done and am doing. I keep setting the bar higher and higher and forgetting the original goals. The first goal was simple, to write a novel. The next was to self-publish it and then the next goal was to have at least one reader who genuinely loved it. I’ve reached all those goals and while I don’t want to ‘distract’ myself with ego, I should, at some point, feel genuinely excited about my writing.
It’s weird, as I type this I get the flutter of tiny, excited butterflies and yet at the same time the rational voice in my mind is firmly stomping them back into place.
Not yet, it says. Not until you’ve reached the next goal.
*Sigh*
One day I’ll be excited…
Take care all!
Nic
The Arrival, available for free right here on this blog!
Awakening on Amazon or UK Amazon or in Epub format right here on my blog (the bright yellow buttons on left!)